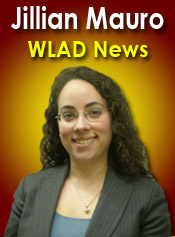 DANBURY (WLAD) -- Jillian Mauro joined WLAD in 2005. This follows her graduation from Hofstra University where she was a reporter for Hofstra-TV.

She has covered a range of stories including: the Anthrax scare, heated political races, the anniversaries of the 9/11 attacks, school news and movie shoots. She reported on John McCain when he was in between Presidential races and stumping for then-Congresswoman Nancy Johnson.

Jillian has been that afternoon Anchor since joining WLAD. For six months she was Acting News Director and morning Anchor, before returning to afternoons.

I'll never forget my first day here at WLAD... A tanker truck caught fire destroying a bridge on Route 7 in Ridgefield. A minivan driver cut off the tanker which flipped, spilling gasoline across the roadway.

Career highlights include: being on a panel questioning the Congressional candidates in 2006, interviewing John Travolta in Redding, and meeting outed CIA agent Valerie Plame.