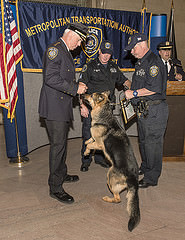 Nineteen canine police officers in the Class of 2014 graduated from MTA Police explosives detection and anti-terrorism training Friday morning in a ceremony at Grand Central Terminal.

Twelve of the dogs will now join their human partners in active duty inspecting unattended or suspicious packages and patrolling the trains, stations, tracks and facilities of the Long Island Rail Road, Metro-North Railroad and Staten Island Railway, a 5,000-square-mile territory across 14 counties in two states.

Seven of the canines who graduated today will join sister agencies who are among the regional partners of the MTA in law enforcement: the NYPD, Putnam County Sheriff’s Office, and the police departments of Brewster and Warwick, N.Y. 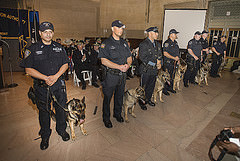 The MTA Police Department has one of the largest canine explosives detection forces in the country, with approximately 50 dogs in service at any time. Last year, the canine teams responded to 27,900 requests for assistance, and inspected and cleared 2,619 unattended packages.

The canines are named after military service members, police officers and firefighters who have given their lives in service to their country.  Joining the MTA Police today are Augie, Chief, Daehan, Foxy, Geo, Holland, Joey, Mac, Patriot, Sentry, T.J. and Vinny.  Joining the MTA’s sister agencies are Blue, Boomer, Dante, Falco, Nox, Sentinel and Tank.