The state Department of Energy and Environmental Protection is taking comment on banning walk ins at state parks.  This was prompted in part by concerns from New Fairfield officials with cars stopping on a curved roadway leading to Squantz Pond.  Visitors looking to use the park after the 250 car capacity is reached are also parking around town and walking along the roadway to the entrance.  Squantz Pond routinely closes early on weekends in the summer because they've reached the car limit put in place several years ago in response to a spate of drownings.

First Selectman Susan Chapman has been calling for a ban on walk-ins since a new Park Ranger took charge of the park.  The former Park Ranger would routinely turn people away, even though walk ins weren't expressly forbidden.  Chapman says she is happy this is finally moving forward, and hopes it's in place before next summer. 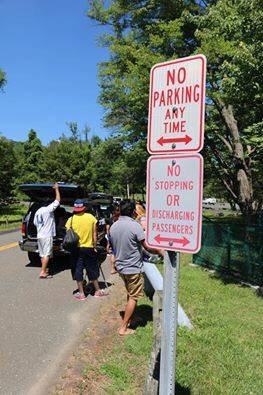 Comments will be accepted through October 7th.  They can be sent online or by mail to: Division of State Parks and Public Outreach, Department of Energy and Environmental Protection, 79 Elm Street, Hartford, CT 06106.  The policy will be reviewed by the State Attorney General before heading to the General Assembly Regulations Review Committee.