Area towns are hosting 9/11 remembrance ceremonies this weekend, including in Putnam County.

The Putnam Heroes Memorial will once again commemorate the 15th Anniversary of the 9/11 attacks at the monument in Cornerstone Park on Route 52 in Carmel.  The Monument contains the names of the eight Putnam County residents who were killed on 9/11, along with First Responders from Putnam County who have since died from 9/11 related illnesses and whose names have been added to the National Memorial Wall. 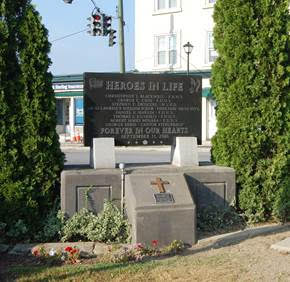 During the Roll Call of names, New York State First Responders and Military Members who have lost their lives in the Line of Duty in the past year will be recognized.  The solemn ceremony is about 20 minutes and is scheduled for 6:30pm Sunday.

The Fraternal Order of Police, Stephen P. Driscoll, a memorial pipe band and the Carmel High School Choir will perform. Preceding the Vigil, there will be a 5:00pm Mass at St. James the Apostle Church, which will honor and celebrate the lives of these heroes.