Firefighters, police officers and civilians have been recognized by the Danbury Fire Department for their efforts to protect the City over the past year.  An awards committee received suggestions of who would get awards and why, and then determined what awards to present.

The Award for Bravery is one of the highest honors that the Danbury Fire Department gives.  It was presented Sunday to Firefighter Gabe Rivera for an encounter with a man holding a shotgun, who threatened suicide.

The call started with firefighters responding to a fire in a boat parked between two homes last April.  They were then alerted to a situation on the front lawn.  Rivera came face to face with the suicidal man and talked him out of firing the weapon.  He tackled the man and pulled the weapon away.  Unit Citation: D/C Bernie Meehan, Capt Joseph K Halas, Lt Jamie B Schiller, FF Stephen R Johnson, FF Gabriel Rivera, FF Keith J Sellick 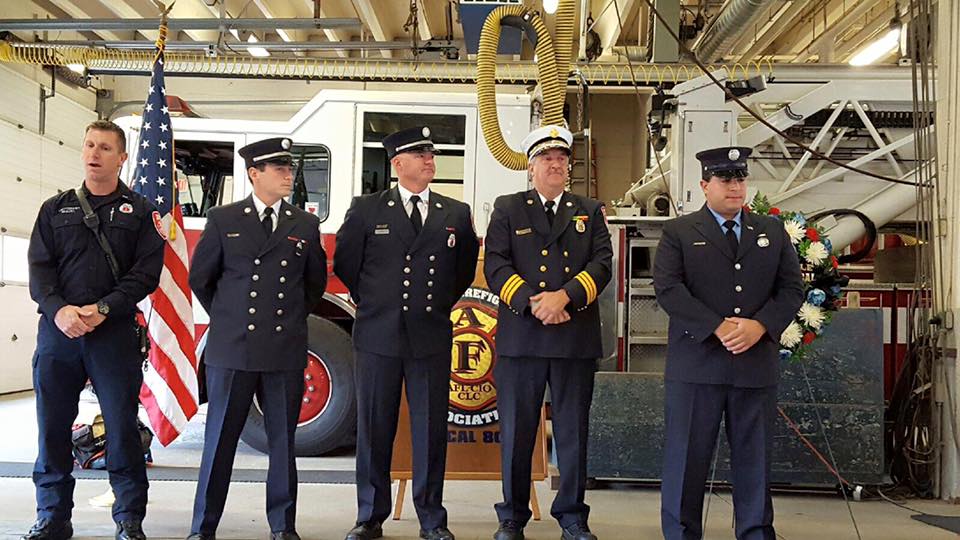 Lynda Miguel and her daughter Karyssa were recognized for alerting dispatchers and keeping them up to date about a Danbury Police Officer being assaulted by a civilian.  Miguel was driving on Germantown Road near Jimmies Market in July when they saw the struggle.  While waiting for other officers to arrive, they drove to a nearby firehouse to seek additional help for the officer. 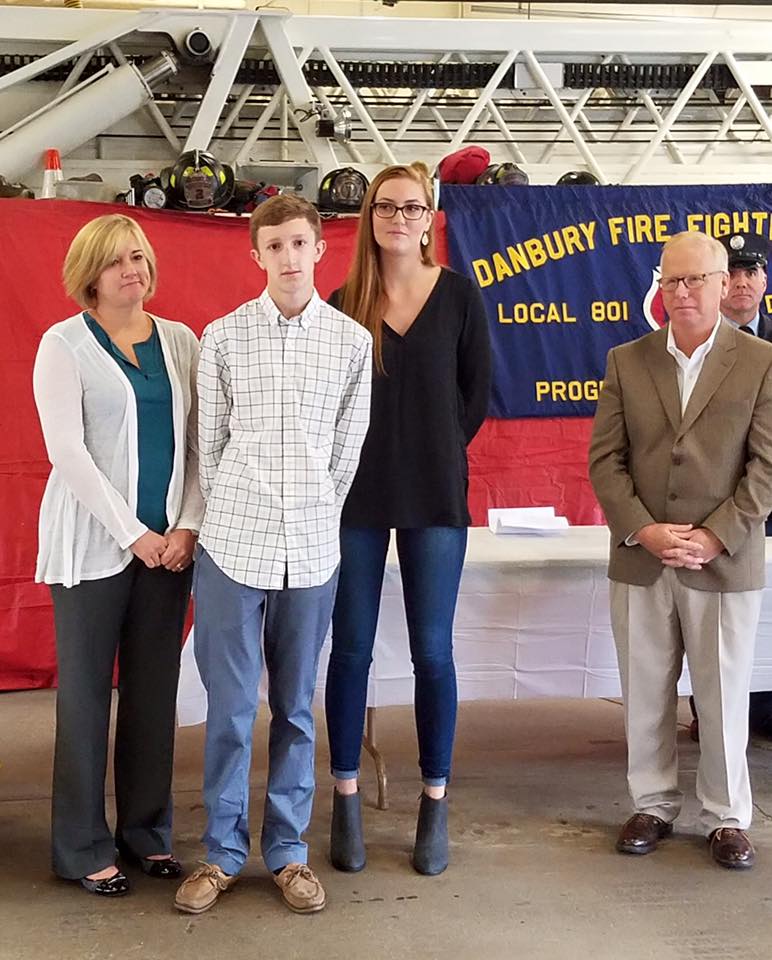 On February 15, 2016, Danbury Fire Department Units were dispatched to an accident in the area on King St. While enroute units were advised that the vehicle was now on fire. The driver and passenger had been removed from the car and were being attended to by bystanders.  The accident had occurred in front of Michael and Gabriella Taubaum’s home, who both came outside upon hearing the accident. The Busse Family, Donald, Laurie and Ashley stopped their vehicle when they came upon the accident.  They worked together to move the driver to safety and remove the passenger from the vehicle.  Based on their actions, The Danbury Fire Department recognizes The Taubman’s and Busse’s with Civilian Awards. Their quick actions directly led this incident being resolved with a favorable outcome. Their actions reflect a great credit upon themselves, and the Citizens of the City of Danbury.

On March 3, 2016, Officer’s Bardelli and Malone were sent to check on the well-being of a Dixon Road resident who had been sending disturbing texts messages and hadn’t shown up for work.   Bardelli and Malone observed through a window a male lying motionless on the floor of the garage with a motorcycle running. They made the decision to force the rear garage door, without use of tools and made entry.  They began providing emergency care, until relieved by EMS unit’s arrival.  Based on their actions, The Danbury Fire Department recognizes Officers Bardelli and Malone with Awards of Merit. Their quick actions directly led this incident being resolved with a favorable outcome. Their actions reflect a great credit upon themselves, The Danbury Police Department and the Citizens of Danbury that they serve.

On March 8, 2016, DFM Handau noticed black smoke coming from the chimney and vent pipes of 8 Main St.  Handau, utilizing a fire extinguisher, was able to hold the fire in check along with a sprinkler head that had activated.  Based on his actions, The Danbury Fire Department recognizes DFM Handau with an Award of Merit. His actions in identifying a hazard, determining the cause and taking steps to mitigate the hazard directly led to this incident being resolved, minimizing property damage and impact to occupants of the building. His actions reflect a great credit upon himself, The Danbury Fire Department and the Citizens of Danbury.

On March 25, 2016, Danbury Fire Department Units were dispatched for a fire in the kitchen of the Western Connecticut State University Student Center.  Upon arrival units were met by Patrol Officer Dos Santos, who reported that a custodial worker had moved a large, oil filled deep fryer to clean the area, when the attached flexible propane gas line failed. The leaking propane gas then ignited.  Based on his actions, The Danbury Fire Department recognizes Officer Dos Santos with the Award of Merit. His quick action directly led to this incident being resolved with a minimal property damage occurring and minimizing the hazard to WESTCONN Community. Officer Dos Santos actions reflect a great credit upon himself, The WESTCONN Police Department, WESTCONN Community and City of Danbury Community.

On June 12, 2016, the Danbury Fire Department responded to a reported MVA with entrapment on I-84/7 Northbound at Exit 11.  The vehicle was in a very unstable location and the driver was thrown partially out of the vehicle and his head was nearly crushed by the vehicle. Units on scene were presented with a very difficult extrication that required an all hands operation. First stabilizing the vehicle and then cautiously cut away parts of the truck to allow the driver to be safely extricated.  Based on these actions, The Danbury Fire Department awards Unit Citations to the unit’s operating at this incident. These actions reflect a great credit upon themselves, The Danbury Fire Department and the Citizens of Danbury that they serve.

On the morning of June 13, 2016, Danbury Fire Department units were dispatched for a reported male choking.  Witnesses reported that male had been turning blue and lost consciousness.  His friend Bill Barrett, a member of the Wilton Police Department, was dining with him and performed the Heimlich maneuver. It was also reported that Mr. Barrett had performed CPR on the man.  For his actions the Danbury Fire Department recognizes Bill Barrett with the Civilian Award. His quick actions played a significant factor in saving of his dining companion’s life. These actions reflect a credit upon himself, the Wilton Police Department and members of the Danbury Community.

On July 20, 2016, DFM’s Bergemann and Timan were finishing up conducting a routine residential fire safety inspection when they detected an intermittent odor of gas outside the residence.  Based on their actions, The Danbury Fire Department recognizes DFM Bergemann and DFM Timan with Awards of Merit. Their actions in identifying a hazard, taking the steps to determine the cause directly led to this incident being resolved with the identified hazard being located and mitigated. Their actions reflect a great credit upon themselves, The Danbury Fire Department and the Citizens of Danbury that they serve.

Firefighters who responded to a fatal blaze on March 2, 2016 were recognized for their efforts fighting that fire.  10 people were able to make it out of the Stevens Street home.  Members of the Fire Attack Group began an aggressive offensive attack.  Members of the search and rescue group began looking for access into the house.  While doing so, they saw a man lying face down on the porch roof with fire coming out the window above him.  The man was semi-responsive and had severe burns to his hands and face.  Based on the actions of the units on scene during the initial stages of this incident.  The Danbury Fire Department recognizes them with Unit Citations.  LT Kirkorian, FF’s Nolet and More were recognized with Honorable Service Awards.