During last night's Danbury City Council meeting, members spoke about the late Gregg Seabury, an at-large Councilman who died on Saturday.  He was 67. 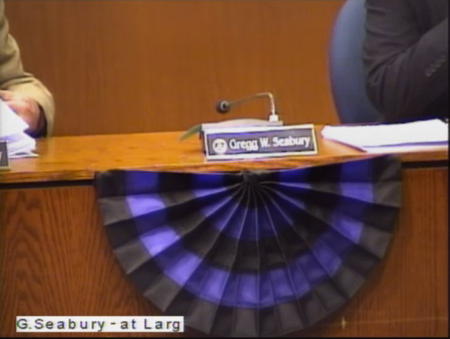 Councilman Fred Visconti served 14 years on the legislative body with Seabury.  He says they were able to do a lot of good work and called Seabury a person who cared a great deal for the City of Danbury.

Council President Joe Cavo says he learned a tremendous amount from Seabury about providing public service and says he had a great spirit and will be sorely missed.

Council Minority Leader Tom Saadi said for him, the measure of Gregg Seabury was how devoted he was to his family and the pleasure he took in his grandchildren.  Saadi also said that Seabury was someone whose public service transcended party and politics to make good policy.

Councilman Andrew Wetmore had Seabury as a teacher when he was a student at Danbury High School.  Wetmore says he probably wouldn't be a college graduate without Seabury.

Councilman Vinny DiGilio's wife had Seabury as a teacher.  DiGilio says he was honored to get to know Seabury over the last two years when they worked together in leadership and said what he missed most was not seeing his truck parked terribly out back of City Hall.

Councilman Phil Curran says Seabury was a popular teacher at Broadview Middle School, Rogers Park Middle School and Danbury High School.  He noted that Seabury worked with a lot ot troubled kids who were proud to tell him they made it because of him.