Posted About Four Years Ago by WLAD Newsroom, AP

There was about average voter turn out in the Greater Danbruy area for yesterday's primaries.  Some 20% to 30% of registered Democrats and Republicans typically cast ballots during the party-specific contests.  The highest participating towns included Roxbury at 48% and Kent with 43%.
Meanwhile, President Trump has made an endorsement in the Connecticut gubernatorial contest. He tweeted this morning in support of Republican Bob Stefanowski, who beat out four others in a primary.  Stefanowski and Ned Lamont will square off in November. 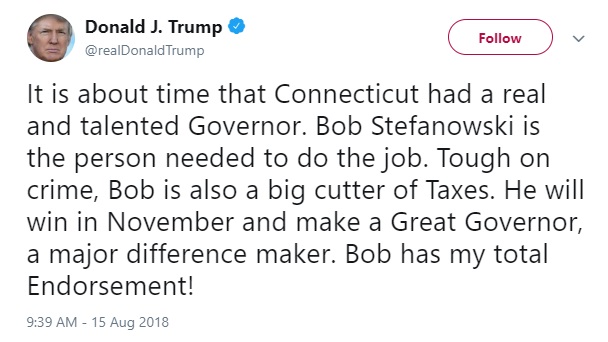 The Madison businessman skipped the party convention process and became the first major-party candidate in Connecticut history to win a nomination after getting onto the ballot through petitions.  The former GE executive pitched himself to voters as Bob the Rebuilder.  He ran ads promising, among other things, to eliminate the state's income tax.
Read All