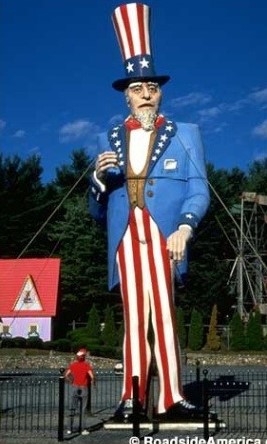 Danbury Mayor Mark Boughton's plan to buy a 38-foot tall Uncle Sam statue, which once stood at the Danbury Fair, has entered its next phase.  The statue was bought by the Magic Forest Amusement Park in Lake George in 1981, and Boughton has started a GoFundMe page to buy it back.

Uncle Sam welcomed all fairgoers during the final decade of the Danbury State Fair.

Donations raised through the crowd funding campaign will help with the purchase, transport, and restoration of the statue.  The GoFundMe page went live yesterday has has raised about $1,000.  The goal is $50,000.

Several possible locations for the statue are being considered.  Since it is so tall, it will likely require wires anchoring it to the ground.

Another Uncle Sam statue, about half as tall, stands in the lobby of City Hall.  It was sold to a private owner in 1982 and was found in a City backyard.  Danbury Fire Lt. Charlie Payne purchased the statue, restored it and loaned it to the city for display in 2012.  The shorter Uncle Sam stood at the south gate of the fair.