Several people were hospitalized following a serious crash on I-84 in Danbury over the weekend.  Firefighters responded to the westbound side between exits 5 and 4 last night on a report of a two-car crash.

State Police say one driver made multiple lane changes before hitting the rear of a BMW.  Three people were extricated from the BMW, which was on its side facing the opposite direction of traffic.  The roof was up against the concrete barrier.  A fire was also burning in the engine compartment creating a difficult extrication.

The second vehicle had two occupants, whom were able to self extricate before emergency responders arrived.  Four ambulances were called to the scene along with an additional Medic due to the number of patients who were all transported to Danbury Hospital. 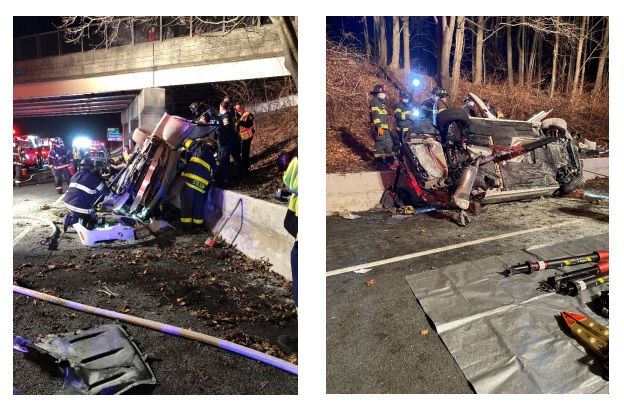 All of the injuries were considered non-life threatening.  The driver who struck the BMW sustained a head injury while the passenger had an ankle injury.