Danbury Mayor Joe Cavo has decided not to seek election to a term of his own in November to lead the City.  He's opted to seek election to an At-Large seat on the City Council.  Prior to stepping up to the role of Mayor in December, Cavo was City Council President.  He took over for Mark Boughton, who joined the Lamont administration as Commissioner of the Department of Revenue Services.

Mayoral Chief of Staff Dean Esposito has announced his intention to seek the GOP nomination to hold the top spot in Danbury.  The Hat City native had been living in Brookfield the last several years, but he and his wife have downsized in Danbury since their children have left house. 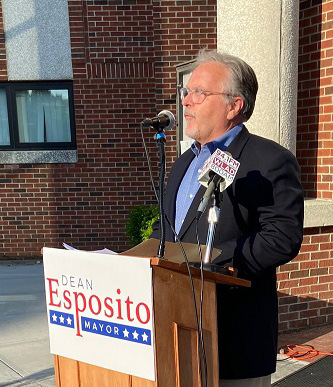 Esposito previously served as a City Councilman and Town Clerk.  He ran as a Democrat against Boughton for Mayor in 2005.  Prior to being Boughton's Chief of Staff, Esposito was Community Services Coordinator.

Esposito was elected as City Councilman for five terms, appointed to Town Clerk in 2003. In 2006, Mayor Boughton named Esposito as the Director of Consumer Protection and Sealer of Weights. Esposito was then appointed to the position of Community Services Coordinator for the Boughton Administration, and ultimately promoted to Chief of Staff, a role he continues for current Mayor Joseph Cavo. Esposito's father Donald was elected to serve as a state representative for Danbury’s 110th District.

Esposito is a distant cousin of Democrat John Esposito junior, a City Councilman who is seeking his party's nomination for Mayor.  The Danbury Democratic Town Committee however is throwing their support behind Councilman Roberto Alves.  There could be a three-way primary for the party, with political newcomer Sedeaka Lawrence also announcing a run for Mayor.