Posted About Seven Years Ago by WLAD Newroom, AP

A member of the New York Air National Guard killed in action in Afghanistan in 2013 will be posthumously awarded a military decoration for bravery.

National Guard officials say Staff Sgt. Todd J. Lobraico will be honored with a posthumous Bronze Star Medal with Valor during a ceremony early Saturday afternoon at Stewart Air National Guard Base in Newburgh.  The Bronze Star Medal is the fourth-highest individual military award and the ninth-highest by order of precedence in the US Military. When awarded for acts of heroism, the medal is awarded with the "V" device.

The 22-year-old from New Fairfield was serving in the Newburgh-based 105th Airlift Wing when his base security unit was attacked by enemy forces near the Bagram Air Base in September 2013.  Military officials say Lobraico's actions during a firefight allowed members of his team to reach cover and return fire. 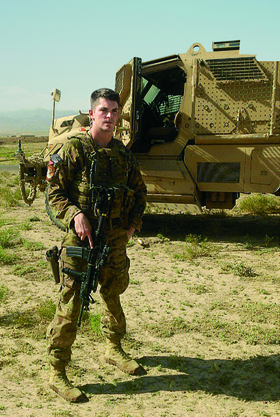 The unit is trained to secure air bases and trains and fights much like Army infantry.

Lobraico is the first member of the New York Air National Guard to die in a combat zone since Sept. 11, 2001.

A building at the base will also be dedicated in his honor.

Sgt. Lobraico volunteered to establish a listening and observation post eight miles from base in known hostile enemy territory.

Despite the inherent risks, he volunteered to take the point position on this mission, scouting ahead and providing security for his fire team. Sergeant Lobraico discovered a large, numerically superior insurgent force in the midst of establishing a planned combined rocket propelled grenade, improvised explosive device and small arms complex ambush of his fire team.

With total disregard for his own safety he placed himself directly between his fire team and the insurgents who unleashed a hellish barrage of rocket, grenade, and small arms fire. Sergeant Lobraico took immediate and decisive actions while braving this intense enemy fire, and was mortally wounded while directing the maneuver of his fire team to covered positions from which they could effectively defend themselves and return fire on the enemy positions.

His actions were instrumental in gaining fire superiority and the survival of his team.

Sergeant Lobraico's remarkable heroism, valorous actions and selfless commitment to his fellow Defenders resulted in the removal of numerous insurgents from the battle field at the cost of his own life. By his heroic actions and unselfish dedicate to duty in the service of his country, Sergeant Lobraico has reflected great credit upon himself and the United States Air Force.