Posted About Nine Years Ago by WLAD Newsroom 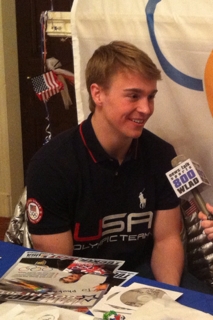 Today is Tucker West Day in Ridgefield.  That was part of a proclamation made at the Ridgefield Community Center last night in honor of the 18-year old Olympic athlete.

The Luge competitor says his family has always supported him and knowing Ridgefield was behind him was a great feeling.  He said the reception was awesome, it felt like he won a medal.  The humble teen also said he felt unworthy of the town rallying together behind him.  He added that he was unbelievably thankful for that support.

West says it only sunk in really during the opening ceremonies that he was competing in the Olympics.  He described walking in with Team USA in their gear as honoring and overwhelming.  He said there was a really camaraderie felt in the stadium that night.

West says it was nerve-wracking competing in the Olympics for the first time with a lot of people watching, but that he trained his whole life for that moment and he was ready.

His dad Brett says his son trained very hard and he's very proud.  No American male singles luge athlete has medaled in the Olympics and says his son wants to be the first.  He's so young, his first Olympics was supposed to be in 2018, but Brett says the experience in Sochi has redoubled his son's mental committment to the sport.

Tucker has moved on from his backyard luge track and trains in Lake Placid.  Starting in November he will be in Europe competing in World Cups.