The U.S. House Democratic Steering and Policy Committee has heard from four people during their hearing on gun violence prevention.  One member of the panel was Emily Nottingham, the mother of 30-year old Gabe Zimmerman, former Congresswoman Gabrielle Giffords' community outreach director who was killed in Tuscon.

Newtown Superintendent of Schools Dr Janet Robinson recounted the events of December 14th, saying it was like every other day until 9:30am.  That's when a troubled young man shot out the front window to bypass the buzzer system and changed the lives of so many in such a short time.  She told the panel that the gunman was confronted by three administrators, including Principal Dawn Hochsprung, who were coming out of a conference room December 14th.

"I can just picture Dawn's indignation that someone would dare enter her school and put her babies at risk.  It would be so like her to be the protective mother hen and never think of her own safety, but only of course of making him stop right then and there."

Robinson called Dawn was a passionate educator who would do anything she could to protect her charges.

She says the gunman then passed the first classroom of 1st graders before killing all but one child in the next room who was clever enough to play dead, not even whimpering.  The next teacher hid as many kids in the bathroom as she could before the gunman took aim at her.

"None of the brave women were trained in combat.  They were elementary school educators dedicated to educating their young children.  So their first response when confronted with this terror was to protect their children."

She also thanked first responders for arriving within 3 minutes of getting the 911 call, noting that in a town of 60 square miles with mainly country roads, that was an incredible response.

"It saved innumerable lives as a shooter carried enough ammunition to have continued throughout the entire school.  And this loving little elementary school was helpless in the face of this assault."

Robinson then explained what happened after parents were alerted of a shooting at the school.

"The true horror of the assault began to become apparent as parents came running, crying to the (Sandy Hook Fire) station looking for their children.  As we released children to their parents, we began to realize we didn't have enough children."

Robinson also read a letter from a 4th grade student, Ava, who called on Congress to ban semi-automatic weapons and high capacity ammunition clips.  A petition the girl posted online called for action and received a lot of support from across the country.  But Robinson says Ava had to take it off the internet because police feared for her safety.

"20 beautiful and innocent first graders were lost that day in a senseless act.  They were no match for a troubled person with an AR15."

Robinson asked Congress to help her give children their futures. 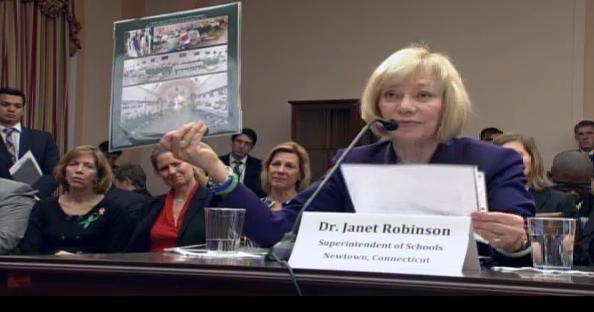