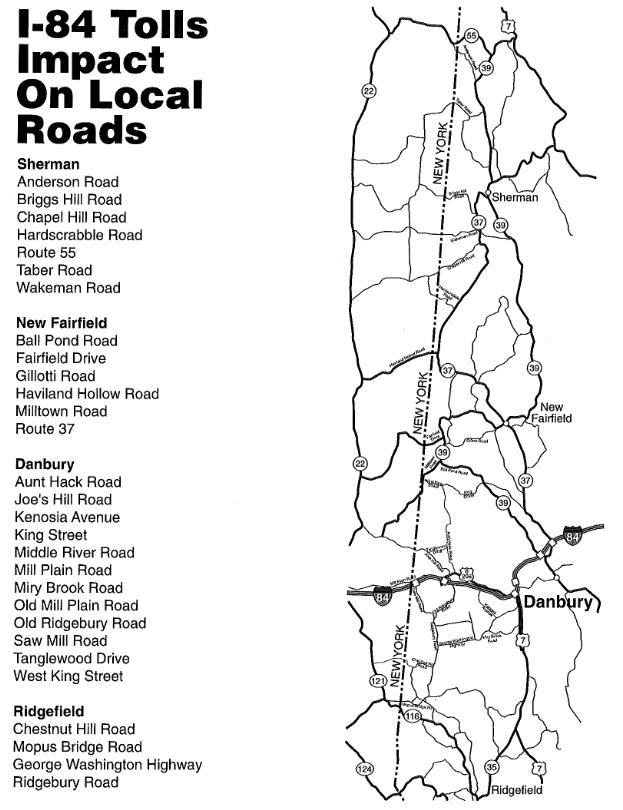 There were hours of testimony given during a legislative hearing held this week on a proposed bill that would create tolls at the state's borders.  Hundreds of people also submitted written testimony.  Danbury Senator Mike McLachlan says there is one big outstanding question in the proposal.  The bill doesn't say how much it would be.  Danbury Senator Mike McLachlan says it would have to be $3 minimum, but even that is unrealistic.

Not all of the testimony was in opposition ot the proposal.  Ridgefield First Selectman Rudy Marconi's testimony is titled How barrier-free tolls can save Connecticut.  He supports tolling for three reasons, two of which he says will attract new businesses to Connecticut.

He says tolls would reduce congestion on the highways.  By charging higher tolls during peak hours, commuters will move to alternative schedules, and public transportation.  Marconi says tolls would be a good way to fund transportation projects.  He says revenue from tolls will allow the state to add capacity, most importantly on the rails.  His explanation is that improved commuter train service will foster business growth along transportation corridors and protect rural areas from sprawl.

Marconi also said tolls in Connecticut is about fairness. While no one likes to pay a toll, he says drivers do so in the neighboring states of Massachusetts and New York.

In his testimony, Danbury Mayor Mark Boughton said tolls should not be used "as a thoughtless stopgap measure simply to try to fill a budget hole".  Boughton said installation of a toll system is very permanent and a perennially costly undertaking that remains in place, potentially forever.