The panel that doles out state capital funding has finally met after a five-month hiatus. And there's a long list of projects that got financed yesterday.  The Commission did not meet while state lawmakers grappled with how to reach a state budget agreement.

Funding has been approved by the state Bond Commission for projects in Bridgewater and in Kent.  Under the Department of Housing requests were made to provide grants-in-aid under the Main Street Investment Fund program.  Bridgewater will use $25,000 to reconfigure Center Street for better traffic flow, parking, accessibility.  Kent has been awarded half a million dollars for implementation of their Main Street Streetscape project.  The Commission did not meet while state lawmakers grappled with how to reach a state budget agreement.

The state Bond Commission met yesterday for the firs time in several months, taking time off while state lawmakers worked to get a tax and spending plan approved.  At their meeting, the Commission considered grants-in-aid for capital improvements to emergency shelter facilities in several communities.  A total of $7 million will be split between Danbury, Fairfield, and 6 other municipalities.

One of the projects awaiting state bond funds that had piled up was funding for body cameras for 14 police departments.  Western Connecticut State University Police will receive $26,733 for the equipment while the Wilton Police Department is slated to get $153,732.

Municipalities were granted money to help with the the cleanup and redevelopment of blighted properties known as brownfields. It was previously announced that Danbury would use funding to clean up the former Mallory Hat Factory site on Rose Hill Avenue.

Grants in aid to Alliance District schools was also approved.  The money is meant to help ni paying for general improvements to school buildings.  Danbury is slated to receive little more than $1 million.  State Representative David Arconti says they money will be used to repair, maintain or replace floors, lighting, cabinets and plumbing at more than a dozen schools in Danbury. 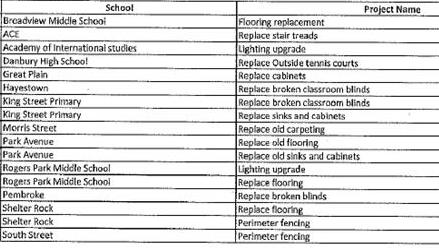 $500,000 for phase 2 of a retaining wall project at Danbury Superior Court and $100,000 for electric switchgear replacement at the White Street facility were also approved.